Where the Animal Movement Will Be Reborn 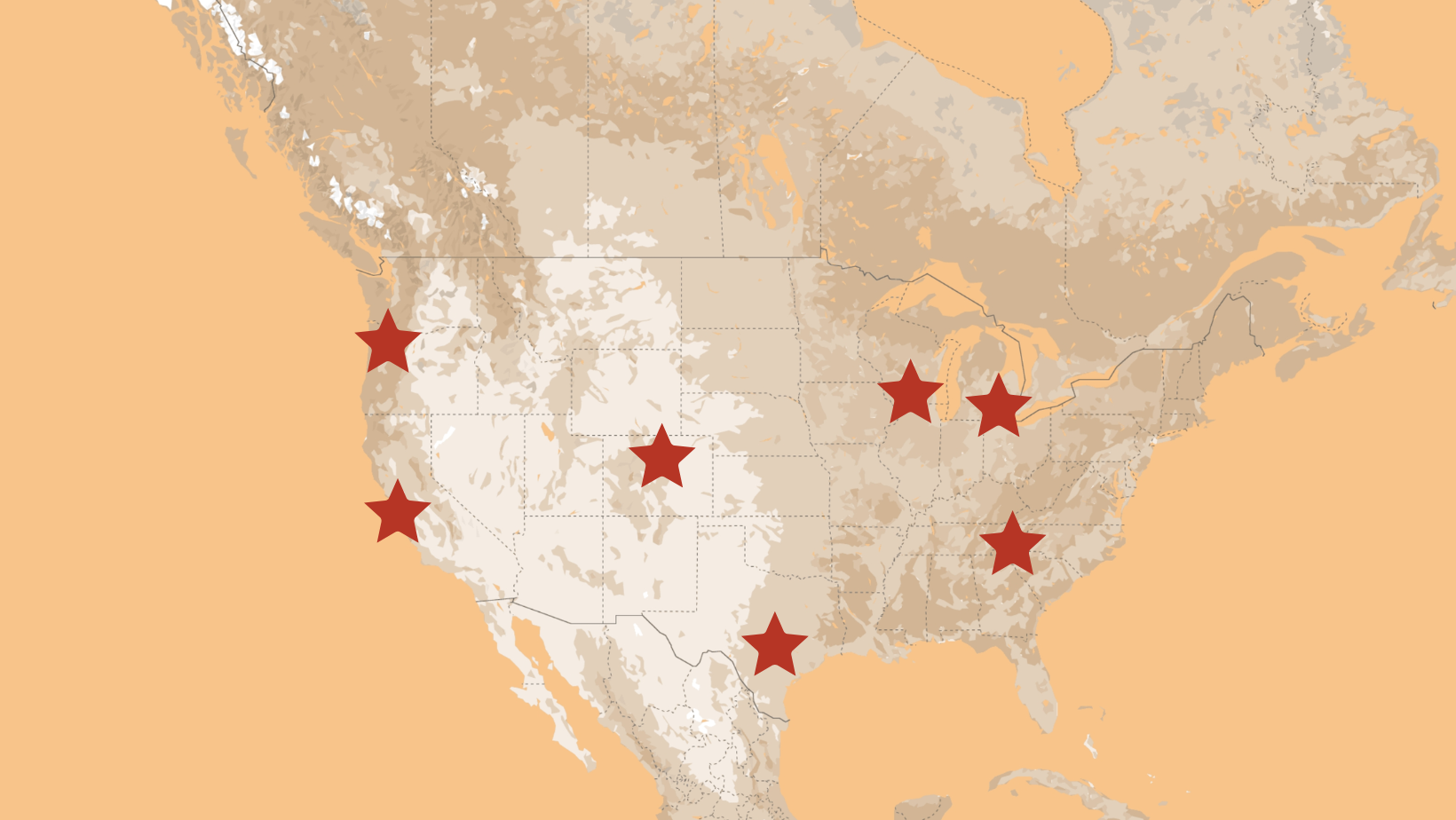 Back when I was an organizer with Direct Action Everywhere, trying to figure out how to build a mass movement for animals, there were a few strategic puzzles that just kept coming up, year after year. One of the most persistent was the debate between concentration and distribution.

One possible strategy was to concentrate all of our energy in one place. We could carefully select a city where we had the best chance of establishing a historic precedent for animals, then encourage dedicated activists to move there, in the same way that the gay community concentrated in San Francisco, creating new norms of LGBT acceptance that slowly spread across the country.

But we could also imagine benefits of a more distributed strategy. By investing in chapters all over the country, we could reach more people and engage more activists. Even if vegans are willing to uproot their lives and move to a new place, it might not be very strategic to remove people from the social networks where they can have the most influence. Being widely distributed would also enable us to seize opportunities wherever they might pop up: it’s impossible to guess where the next dramatic escape of an animal from a slaughterhouse will happen (a fantastic opportunity for a protest to seize the narrative) or where an unexpectedly sympathetic city council might take shape. This was the let-a-thousand-flowers-bloom strategy of SNCC, Martin Luther King, and other civil rights strategists in the 20th century, all of whom built deep networks of community organizing all across the American south.

(This problem is specific to social movements in the United States and other countries with a large population spread out more-or-less evenly across a massive area. For this reason, I was always jealous of movements like in the UK, where a whopping 14% of the population live in the London metro area and 87% within a four-hour train ride, allowing nearly everyone in the country to get to a major protest in London and still be home in time for dinner.)

Well, I recently stumbled onto an answer to this old predicament: A solution that promises the best advantages of both concentration and distribution. It happened in a funny way.

At Pax Fauna (where, sure enough, I’m still trying to build a mass movement for animals) we work remotely, which has allowed me to move out of my house in Boulder and spend several months traveling, doing stints of house-sitting and couch-surfing in various cities across the country. Well, actually, I’ve been drawn to certain cities in particular: Boulder, Berkeley, Portland, Madison, Asheville, and Austin. When people ask me, I’ve struggled to name exactly why I feel drawn to spend time in each one, what it is that these cities seem to have in common besides being the sorts of places angry counter-protesters tell animal rights activists to “go back to.” I certainly have personal connections in each, but somehow it feels deeper. I’ll sometimes say something like, “There’s kind of a vortex between all these cities, right?”

Right, it turns out.

I was recently introduced to an amazing data set published by Facebook, which measures the connectedness between every county in the United States. The Social Connectedness Index essentially measures the density of Facebook friendship connections between any two counties. We learned about it in Change, a book by social network researcher Damon Centola, who advises that it is a pretty good way of measuring real social connectedness at this point in time.

So I decided to use this data to test my theory about the “inter-city vortex.” I grabbed the data for each of the counties I was interested in. It’s basically a spreadsheet listing every possible pair of counties, with a score for their relative connectedness. (With 3192 counties in the country, the file has over 10 million lines of data. It crashed Aidan’s computer. We had to call our friend Steven Rouk for help. Thanks, Steven!)

As one would expect, each county is most connected to itself, followed by neighboring counties, other counties in the same state, and often a few counties in neighboring states. This much isn’t new, of course. We know people who live near us.

But for many counties, when we look past those initial close geographical connections, we find county pairings start to pop up that aren’t geographically close at all. As I looked at the places I was most interested in, even though they’re literally spread all across the country, some of the same counties kept popping up.

Some groups of counties are indeed highly connected to each other, forming different socio-cultural networks geographically dispersed throughout the US. And sure enough, one such network was that progressive clique I’d been trying to put my finger on. It included all of the places I’d originally hypothesized, as well as a few I wasn’t expecting.

But don’t worry, this piece is about more than just providing scientific validation for my travel plans, though that’s a nice plus. This network of cities is our answer to the problem of concentration vs. distribution.

Change is a book about how new norms spread through social networks. Or, more accurately, why some norms spread and others don’t. In it, Centola works out that the answer has much less to do with the norm itself (i.e. is it “viral” enough) and much more to do with the layout of the social network it is spreading through. In the simplest terms, while information spreads through social networks like a virus, jumping quickly from person to person across networks, behavior change spreads very differently. These complex contagions (such as believing in animal rights or participating in a social movement) spread through tightly knit social clusters on the periphery of a network, building momentum at first by reaching critical mass in small, relatively isolated clusters. Centola calls this the Snowball Strategy (read all about it here).

So far, the Snowball Strategy would seem to be an argument in favor of social movements concentrating their efforts in one place. But there’s one more crucial step. A new norm starts by building momentum in social clusters on the periphery. But how does it break out of that cluster and into the mainstream?

The answer, according to Centola, is wide bridges. Behavior change doesn’t spread easily. It has to overcome a lot of resistance. The reason these changes start in social clusters on the periphery is that these clusters are made up of strong ties- important personal connections involving a lot of trust and social influence. Weak ties, like acquaintances we meet at conferences or the dentist we see twice a year, aren’t powerful enough to spread new social norms. You’re probably not going to change fundamental beliefs or behavior just because your dentist tells you to, right? (Be honest: how often have you been flossing lately?)

Well, it turns out this principle doesn’t just apply on the individual level. For a new norm to make the jump from one social cluster to another, the two clusters need to have a strong connection. And the way that social groups are strongly connected is through wide bridges. Basically, two groups that have lots of connections between them share a wide bridge. At this level, the strength of the ties is less important than the number.

Which finally brings us back, as you guessed, to our network of cities. The Social Connectedness Index shows that the following cities all share wide bridges with each other:

(We show our work here.)

Simply put, what happens in Portland or Asheville matters more in Boulder than what happens in, say, Cleveland or Las Vegas, because of the wide social bridges between these cities. But why are we talking about this network of cities in particular? They share more than just wide bridges. These are all very liberal cities, and several are college towns with younger-than-average populations. Besides gender, the two strongest demographic variables predicting greater support for animal rights are liberal politics and youth.

All of this points to a potential strategy for the animal rights movement: to invest our resources neither in one central location nor in complete dispersion, but instead in a carefully chosen network of cities throughout the country. The essential hypothesis is that efforts and changing norms in each of these cities would be mutually reinforcing. If a vegan in Boulder decides to join a protest, her influence makes it more likely that her friends in Berkeley and Asheville will decide to join a similar protest organized in their area. If the politics of animal freedom catch on among young people in Portland, they’ll spread it to their friends in Austin and Madison, reinforcing activists' message in those cities. (In Change, Centola documents several modern trends that spread in precisely this way, from the hashtag #blacklivesmatter to the original adoption of Twitter as a tool.)

By focusing on just this handful of cities, we can effectively concentrate our resources while building a genuinely nationwide movement. If we can get animal rights to catch on in this peripheral network of hip, liberal cities, we’ll have anchors down in half a dozen states (including some solidly red states, Texas and North Carolina). From there, our snowball can build into an avalanche.

We’re calling on any organization that runs local or area-based programs to join a conversation: what would it look like for many movement organizations to combine our efforts in a carefully chosen network of cities like this? Imagine what would be possible. Imagine the kind of flourishing movement we could create by giving it everything we’ve got in just the right places. University campaigns, vegan restaurant pop-ups, raucous anti-fur protests, ambitious ballot measures, and everything else you can think of all within a few square miles of each other. Surely, that’s what it looks like for animal freedom to become normalized.

We’re not married to only these cities; for one thing, they’re whiter than the nation as a whole, and weighted towards blue states, which carries a risk of locking us in as a partisan issue. We just want to get the conversation started. If your org is involved in any strategies like this at the city level, comment here or reach out!

6 comments on “Where the Animal Movement Will Be Reborn”