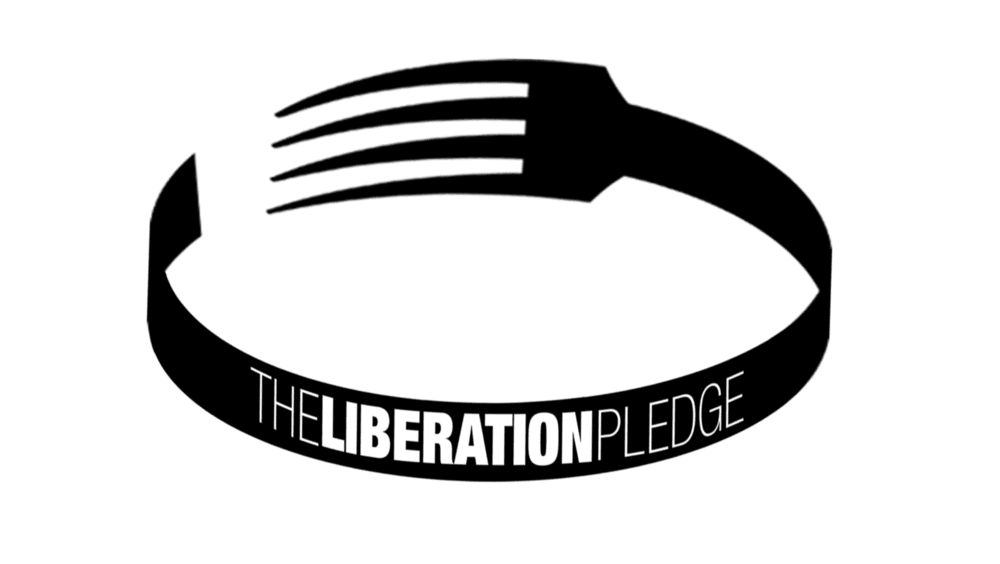 An icon of fork bracelet inscribed with “The Liberation Pledge”

In 2015, animal advocates with Direct Action Everywhere (DxE) launched an inspired new campaign among their members. It took courage, required sacrifice, and greatly backfired. This three-part series examines what the movement learned from the Liberation Pledge, how we might energize the intention behind the Pledge in a better way, and a piece to share with friends and family to do just that.

What We Learned From the Liberation Pledge

The Liberation Pledge was a fascinating idea and a bit of a disaster. Instead of energizing supporters’ social networks to create change, as its creators intended, it often had the opposite effect- to isolate advocates from their closest relationships.

In this piece, you’ll learn

The next piece in this series suggests a better way to energize the intention behind the pledge, for animal advocates to align their actions with their values in their personal relationships.

The Liberation Pledge was a three-part public pledge to

Enthusiasts of the pledge hoped it would create a cultural stigma around eating animals similar to the stigma that has developed around smoking over recent decades. That is, even while smoking is still practiced, it is prohibited by default in public and private spaces.

Before we had the Pledge, many of us felt alienated from friends and family who continued to eat animals. We were forced to choose between two options: speaking up and risking being seen as obnoxious, angry, and argumentative, or keeping the peace with painful inauthenticity, swallowing our intense discomfort at watching our loved ones eat the bodies of animals.

The pledge gave us hope that there was another way: being honest with those around us while continuing to spend time with them. And, on a larger scale, we hoped that if we all joined together, we could create a world where eating meat is stigmatized: a world where someone would ask, “Does anyone mind if I get the steak?” before making an order at a restaurant (or maybe even one in which restaurants would think twice before putting someone’s body on the menu).

Some people took it a step further, arguing it was immoral not to take the pledge, saying, “You wouldn’t sit quietly eating your vegan option while a dog or a child was being eaten, would you?” According to this view, it was our duty not to sit idly by while violence was committed in our presence.

While some beautiful and inspiring stories were detailed on a Facebook group for the Pledge, it seemed to me that there were many more instances of total disaster: people experiencing huge ruptures in their oldest relationships around the Pledge while often lamenting that those they had just discarded  “care more about eating dead animals than they care about me.”

From where I stood, the biggest effect of the Pledge was for advocates to lose relationships with family members who didn’t comply. Upon taking the Pledge, a close friend at the time experienced a years-long estrangement from their family, including those who were already vegan while many others decided to skip birthdays, weddings, and holidays with family. It’s possible that all of this added stigma around eating animals. With these relationships broken down, we don’t know.

I believe the pledge was so popular because it politicized something that we desperately wanted for our own comfort–no animals on the table while we were there–and I took it pretty much as soon as it launched.

The Pledge certainly contributed to my alienation from nonvegans, though I neither experienced the best nor the worst of it. My immediate family accommodated a request for vegetarian tables at holiday dinners, but I’m sure that there were many invitations I would have received if not for it. While my overall immersion in the animal rights community during that time certainly deserves some of the credit for the fact that I didn’t develop many new relationships with nonvegans during the following several years, the effect of the Pledge can’t be discounted.

A website was created with advice for taking the pledge, which is still online as of this writing. It suggested that pledge-takers write a public statement (a model announcement is provided) to inform their friends and family about their new commitment. It also offered some logistical suggestions for getting together with friends and family who aren’t willing to cooperate with the rules of the Pledge. Most importantly, it laid out the reasoning for why we must, together, participate in the Liberation Pledge (to stigmatize eating animals) and directs the reader to “stay firm and nonviolent in the face of conflict.”

This was the right kind of advice, but it fell far short. With the benefit of hindsight, we can say that the founders of the Liberation Pledge underestimated just how difficult an undertaking they were proposing. In fact, the pledge in practice often had the opposite of its intended effect, an outcome that profoundly undermined DxE’s central theory of change. DxE believed in the power of social networks to create change. That is, by taking bold actions and making personal sacrifices, activists would present a model to their communities and inspire friends and family members to reconsider their views on animals. However, while the pledge was meant to spark this process, in practice, it resulted more often than not in the disconnection of activists from their social networks. Instead of creating change by leveraging their personal relationships (the most important resource activists have, according to the social movement theory of change), the pledge weakened and sometimes even severed these relationships.

I believe these problems were mostly a matter of inadequate training. Pledge-takers were sent to the front lines of a fiery struggle for social change (their family dinner table) with nothing but a template letter. In contrast, tactics that involved legal risk or personal safety were only encouraged with plenty of training. While the Pledge wasn’t a matter of life and death, freedom or prison, it was a risk to members’ closest and most important relationships. With 20/20 hindsight, it seems that it was unwise to encourage pledge-takers to risk these relationships with so little training.

The Meaning of Nonviolence

A lot of people might think of activism as characterized by righteous anger, held in an image of somebody yelling into a megaphone at a protest. But DxE understood that while anger has its place as an energizing and powerful force, the task of winning over hearts and minds is difficult, delicate, and requires extraordinary discipline over our own emotions. They might not have fully understood how much more difficult this is with our loved ones than with the public at large. The same advocate who can always treat hecklers at a protest with kindness might still be underprepared to treat their own family members with love and acceptance when the topic of animals comes up.

The Alienating Aspects of the Framing

Framing the Pledge as a political action instrumentalized our closest relationships, communicating to those closest to us that we thought of them as objects to be used for the cause.

By framing the Pledge as a pledge or oath, it was presented as a promise to people who weren’t present. Exasperated by the custom and direction to make a public statement before having private conversations with those affected, the Pledge had an unnecessary effect of communicating to our loved ones that they didn’t really matter to us, at least not in comparison to this new thing we were doing. By not including our loved ones in a decision that would greatly affect our future interactions, we communicated something that was often taken as profound disrespect.

At the same time as it communicated that we didn’t particularly care about our loved ones, it explicitly appealed to their care for us, creating a heartbreaking competition about who loves the other less, and therefore gets the accommodation. Some of our loved ones must have felt that they’d be showing disproportionate care for us by agreeing to vegan tables, and so they attempted to call our bluff by serving meat.

Of course, not every Pledge conversation went this way, and many included affirmations of how much the relationships meant to us. Some relationships truly were deepened by the pledge, but it seems that they were the exception.

Even if you plan to hold a boundary around sitting at such a table, framing it as such in initial conversations is confrontational to an antisocial degree. Rather than inviting others to understand our experiences, the explicit focus on integrity (I wouldn’t sit if a dog were being eaten) unnecessarily created an adversarial dynamic.

One Size Fits None

By being all or nothing, the Pledge puts us in a position where we are de facto excluded from many large events or gatherings with people who don’t know us well. In these cases, it won’t  make sense to accommodate us by inconveniencing so many others, especially if our hosts don’t know us well.

As It Lives Now

In the early days of the Pledge, attendees at every DxE event were repeatedly encouraged to take it, in observance of its third tenant, to encourage others to do the same. Today, it is rarely discussed in public, probably due precisely to some of the harms I’ve described.

While some people continue to practice it in some form, it seems that the political framing has largely dropped off. We understand that, while it didn’t take off as a political strategy, the practice of only sitting at vegan or vegetarian tables is important for our own mental health. Most people still practicing the Pledge (at least the ones I know) are dedicated animal activists who largely associate with other vegans. When we don’t, we might quietly suggest a vegan establishment and only inform our potential dining companions of the pledge when necessary. “The Pledge” still exists as shorthand for this habit, even when its third tenant and political framing are absent.

While mostly inert, I believe that the Pledge continues to cause harm, albeit small harms compared to when it first came about. The Liberation Pledge Facebook Group remains somewhat active as a periodically updated illustration of the Pledge’s continuing effects. A recent post asks for advice for dealing with a mandatory school event, predicting that the writer will end up sitting alone in the corner throughout. To this person, it seems that the Pledge will prevent her from getting to know her classmates and thus prevent her from becoming a person whom they can know well enough to look to as an example. In addition, the poster’s relationship with the Pledge deprives her of the chance to develop connections with others.

You may be thinking at this point that I’m encouraging everyone who has taken the Pledge to renounce it: that’s not where I’m going.

In the next piece, I offer a proposal for rethinking the concept behind the Pledge to support the relationships and well-being of movement participants. With some slight modifications, the promises of the Liberation Pledge can be realized as a vehicle for connection and a microcosm of social change. Click next to learn more.