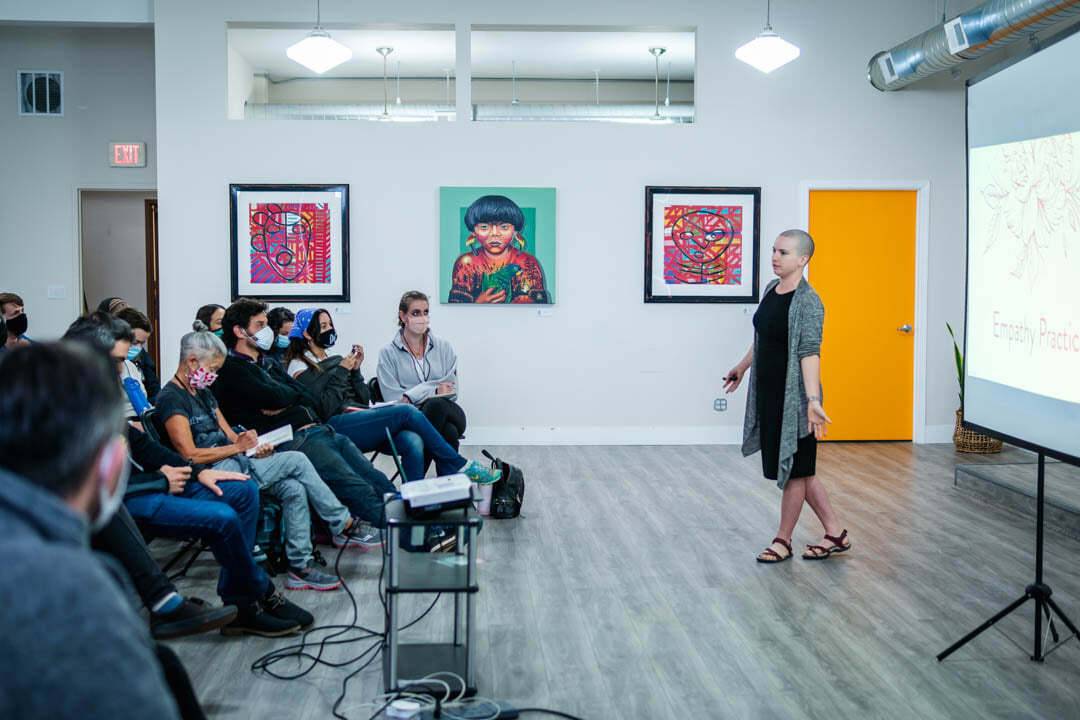 Who wears her heart on her sleeve?

I recently volunteered at a high volume spay/neuter clinic in the Navajo Nation. Watching a large Shepherd mix walk to her crate to await surgery, I was struck by the unselfconsciousness of her emotional expression. She pulled on her leash and darted from side to side, with her nose to the ground and a low wag of her tail- a picture of anxiety. I imagined myself going to a conference, nervous for a presentation and whether I’d be caught forgetting someone’s name, and how automatically I’d try to hide my emotions- masking my facial expressions, holding my hands still, forcing my gaze to move at a slower pace.  If I was very successful, I might hide my emotions so well that I’d hide them from myself, only considering that I might be nervous when I made too many errors with my words or turned around so frantically that I spilled someone’s coffee. Or, I might never notice my nervousness, and only see evidence of generalized stress as bad news at my annual checkup.

Emotionality is to being animal what rationality is to being human. This simplification of a human- animal binary suggests that development and understanding of our own emotionality is in advocates’ interest in breaking down this binary. When we can experience ourselves as fully human and fully animal, we can begin to free ourselves from deeply internalized beliefs in white human supremacy. Without a deep familiarity with our own emotional landscape, we risk forgetting our animality and thinking of ourselves as superior to emotional creatures.

Animals as a political category

In their book, Afroism1, sisters Aph and Syl Ko offer that animal is a political category in addition to a biological one, much in the way that discussion of biological sex is often a stand-in for the political concept of gender. Animal here is a concept that allows some individuals, including certain humans, to be excluded from moral relevance. We can imagine a spectrum where whiteness and maleness is more human while blackness and femininity are less so. This provides a psychological basis to the coherence of Trump’s remarks about migrants as animals or the many animal-inspired racist or sexist epithets. “Animal” or “ape” only make sense as an insult where animal means distance from an ideal human.

Other traits, biologically independent of but sometimes politically associated with gender and race, also contribute to one’s place on the political human- animal spectrum. Folks with intellectual disabilities are sometimes referred to as trainable or educable to differentiate them on the extent of their disability. The language of training some humans and educating others provides that some humans are animals1, in the words of the Ko Sisters, while racist beliefs about black folks’ proclivities towards violence result in huge numbers literally caged.

When I was a child, a grey and white cat showed up in our family and decided that our home was hers. Soon after, a kitten with similar markings arrived in the same way. We began differentiating them as the big cat and little cat, imagining them to be temporary visitors, but as they became members of our family, the names stuck.

I remember sometimes fixing my gaze on Little Cat and trying to understand that she was an animal. An animal, I’d repeat in my mind, straining to imagine her to be of the same Kingdom as racoons darting across the road at night, or of bears I’d delightedly ogle at the local zoo. Sometimes I’d get a glimpse of her in this way, a brief flash of Little Cat as a body with fur and claws- animal rather than, well, Little Cat. More often than not, she’d respond to my staring with a meow or a nuzzle that pulled me back into interaction before I could see her as anything but family. I felt sure of her discomfort in these moments, that she didn’t like these experiments of mine- didn’t like the way I looked at her and maybe even the distance I might inject between us when I tried understanding her as animal.

Imagine a spectrum, with white men in suits at one end- the most human, and chickens in factory farms far towards the other.

When we consider these most human individuals, we find individuals socialized to be the least permitted to emote. Conversely, the least human humans- imagine women, black folks, and children- are painted as ruled by emotions. Animal advocates often argue that animals are capable of experiencing emotion, as a way to plead for their moral consideration, but where has our own ability to experience emotion gotten us with the power holders of the world? How expert are the most human among us at experiencing the full range of their own emotions?

A common retort to advocates’ pictures of animals’ friendships, loyalty, humor, and trauma is an accusation of anthropomorphizing, a ten dollar word for a fully semantic argument, even when Humanness means more rationality and less emotional expression. Perhaps instead of saying animals experience human emotions, we should argue that humans experience animal emotions.

As obvious as this sounds on its face, I invite you to occasionally pause and name the emotion you’re experiencing under the assumption that you are, indeed, experiencing an emotion. Can you name the subtleties of responses to everyday stimuli, or the tinges of emotions you might feel embarrassed to admit to- and also name that embarrassment? Are you fully aligned with the emotional motivations of your actions, or are you able to believe that any decision is made without emotion? Can you feel an internal shift when an emotion is named? What would you call that sensation?

Studying nonviolent communication (NVC) involves developing one’s ability to self-connect and name emotions, separating them from judgements, stories, or other pseudo rationality. A striking but routine occurrence in many beginners of NVC, especially, in my experience, older men, is the discovery of a hugely limited vocabulary for naming emotions. We might report feeling good, ill, or angry, and have significant difficulty in naming a greater spread of feelings.

Our invitation to develop your ability to experience and express emotions is motivated by my disgust at the strength of the ideological boundary between humans and animals and its consequences for individuals whose interests are dismissed as animal. (Again, human and otherwise.) I hope that an invitation to develop both awareness and acceptance of emotions is an invitation to understand yourself as animal, as a natural and emotional being. Nothing here is meant to reject rationality or humanness. In fact, we believe that the more we develop our ability to self-connect, the more perfectly we’re able to be rational. Indeed, emotions that aren’t named do not just disappear. They manifest as motivations, thoughts, and even illnesses whose cause we may not be aware of. Only after acknowledging emotions can we truly decide how or when to act on them.

In our research, we sometimes hear our subjects disgusted with the unnaturalness of factory farm environments, where animals are denied the opportunity to perform species specific behaviors. Imagine pigs rooting in the dirt, chickens dust bathing, and cows nursing their young. Similarly, we sometimes look with concern at highly trained dogs and wonder if they’re ever allowed the chance to dig and play tug of war- behaviors we see as important to the well being of members of their species- or if they’re so disciplined that they never indulge in such delights.

The practice of naming our emotions is vital to the wellbeing of the human animal. Think of it as one of our species specific behaviors. Although trained, to varying degrees, to suppress this inclination, the internal process of naming emotions shifts the nervous system in these animals in ways that are easily observable in a laboratory setting2.

The value of naming emotions- resonance

Human brains possess an amazing ability to self regulate- to experience a soothing effect of resonance simply by naming our own emotions. We learn this ability in childhood if we have a warm and responsive primary caregiver, and later through warm and secure relationships with important others. Continuing the development of this skill is a precious species-specific behavior to humans that allows us to regulate our own nervous systems and thus improve our quality of life, effectiveness of our work, and our physical health.2

Breaking down the human- animal binary means that we needn’t choose a place on the spectrum to occupy, but that we can defiantly pursue both the fullness of our humanness and animalness at once. We can be in full connection with our intellect and emotional selves and never see them in conflict. By studying nonviolent communication or other life affirming self-connection modalities, we can reject a restrictive view of what it means to be human and therefore begin to break down a human-animal binary that allows some individuals to be treated as less than human.